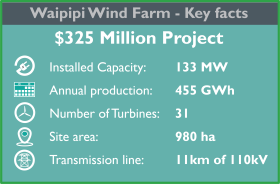 The Waipipi Wind Farm project is located across 4 privately owned farms and is spread across a land area of approximately 980ha. It was vital to ensure any potential impact due to construction was minimised, resulting in less than 2% of the construction site land being impacted. Regular farming activities continue in parallel to the wind farms operation.

Originally Transpower received a 10-year consent to build a 48 turbine 130MW wind farm in South Taranaki. The consent included a transmission line running from the site to Transpower’s Waverley substation and was issued in July 2017. Recently, an 11km 110kV transmission line was constructed to connect the wind farm to the national grid at the substation. The electricity produced by the wind farm has been purchased by Genesis Energy for a period of 20 years.

The Waipipi Wind Farm project consists of 31 wind turbines with a total generating capacity of 133MW. The average site wind speed is 8.6m/s (31kph) at hub height making the site an ideal location for a wind farm.

The wind farm was expected to cost $325m to build and generate 490GWh of electricity a year which, based on average residential consumption, would produce the same amount of electricity as used by over 65,000 homes.


The wind farm is in a great location to provide renewable electricity to meet growing demand and displace existing thermal generation with its high level of carbon emissions.  The wind farm could avoid 337,400 tonnes of C02 per year if this electricity were to be generated from a coal-fired plant or 196,800 tonnes in avoided gas fire generation.

In 2016 Trustpower received final court approval for the demerger and listing of its Australian and New Zealand wind businesses. Mercury is currently responsible for the wind farms consent and operation.

Genesis and Tilt Renewables announced on 17 October 2018 they intend to partner in the development of the Waipipi (formerly Waverley) Wind Farm. They have established a strategic relationship and agreed proposed terms and conditions for a long-term power purchase and services agreement.

The Waipipi Wind Farm will be owned and operated by Mercury and the investment decision to commence construction was announced in August 2019 with the electricity to be sold to Genesis Energy under a 20-year offtake agreement.

An event to celebrate the commencement of construction was held in November 2019.

The wind farm will have a total capacity  of 133MW and will consist of 31 4.3ME Siemens Gamesa turbines each with a 130m rotor diameter. The total expected cost of the project is $276 million.

Once operational, the average annual generation will be 455GWh.  The electricity generated will meet the annual electricity needs of approximately 64,000 average homes or over 200,000 electric vehicles.

The wind farm could avoid 443,000 tonnes of C02 per year if this electricity were to be generated from a coal-fired plant or 207,000 tonnes in avoided gas fired generation.

The wind farm is located approximately 6km south-east of Patea and 7km south-west of Waverley, in South Taranaki.

There was concern about the turbine’s effect on seabird populations in the area. The effect has been mitigated by filling in three ponds and enhancing some water bodies, wetlands and dunes outside the wind farm’s footprint to improve bird habitats outside the area.

In addition an Environmental Buffer Zone (EBZ) is located around the coastal perimeter of the site to protect the visual amenity and natural character of the area, coastal hazards, noise, ecology, avifauna, and heritage matters. No activities are permitted in this zone during the construction or operation of the wind farm. All up, the 800-hectare project envelope covers four properties, excluding those areas which form part of the EBZ.

Project information and additional details can be found here:
https://www.mercury.co.nz/why-mercury/renewable-energy/wind-generation