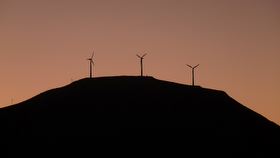 Weld Cone, Energy 3's three-turbine 0.75 megawatt wind farm in Marlborough, began operating in February 2010. It took three days to erect the wind farm's turbines, and then a further week to commission them.

The wind farm supplies electricity into the local Marlborough Lines network. It generates about 3 gigawatt-hours per year - which is about the same amount of electricity used by 350 to 400 homes.

The wind farm's three turbines are secondhand Micon 530 wind turbines, each with a capacity of 250kW. They were brought in from Germany and Denmark and refurbished in Christchurch. Weld Cone is the third site at which second-hand turbines are installed - Horseshoe Bend and Southbridge also make use of second hand turbines.

The project received consent in May 2009 and was not appealed. The wind farm is owned in a partnership between the landowners and Energy3.