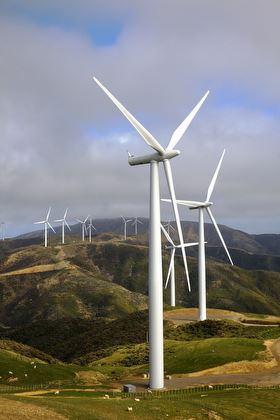 Project West Wind, Meridian Energy's third wind farm, makes use of a valuable but much maligned Wellington resource - the captial's strong winds. Construction began at the site in October 2007. The first 15 turbines were officially switched on by Prime Minister John Key on April 29 2009. All 62 turbines were operating by September 2009.

The funnelling effect of Cook Strait provides the site with strong and consistent wind speeds. Project West Wind is hailed as one of the best performing wind farms in the world and even used in global advertising by the turbine supplier.

On an annual basis West Wind generates as much electricity as 70,000 average New Zealand homes would use in the same period. That is the equivilent to powering all the homes in Wellington City.

Within a few months of generating first power, the wind farm demonstrated its ability to enhance security of electricity supply in Wellington. In September 2009 an equipment failure at Haywards substation isolated Wellington from the national grid. West Wind's generation during the incident kept the lights on in Wellington.

The Siemens 2.3 megawatt wind turbines stand 111 metres tall. The towers are 67 metres high, and the blades are 40 metres long.

The turbines generate electricity in winds between 15 and 90 kilometres per hour. In extreme weather conditions, the turbines automatically shut down to prevent damage.

West Wind is a challenging site to access from Wellington, as local roads are narrow and winding. Turbine components from overseas arrived at Picton, at the top of the South Island. Once unloaded, they were delivered across the Cook Strait to the wind farm site by barge.

Turbine components were offloaded at a temporary wharf in Oteranga Bay. Fourty-two kilometres of road linked the wharf and the turbine platforms. In most places the roads are seven metres wide.

The turbines were installed and commissioned in groups, allowing the site to generate increasing amounts of electricity as work progressed.

The turbines are linked to an on-site substation with underground cabling. From the substation, the wind farm is connected with a short overhead line to the Wilton-Central Park double circuit transmission line.

The wind farm site is marginal farmland, but it has a long history of human activity.

In pre-European times the area was heavily populated by Maori because of its strategic position and access to plentiful seafood on the coast. There are a number of historic sites in the area, including pa, ngakia (gardens) and urupa (burial grounds).

The area was mined for gold between the 1860s and the early 20th century. During the Second World War two gun emplacements and associated structures were built on the cliffs overlooking Cook Strait.

The HVDC power cables (which link the North and South Islands) come ashore within the wind farm site at Oteranga Bay.