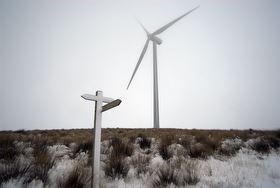 Meridian Energy’s White Hill wind farm was the first wind farm to be built in the South Island. It is six kilometres south-east of Mossburn in Southland.

The turbines have a combined capacity of 58 megawatts, and generate enough electricity annually for 30,000 homes.

The wind farm site is about eight kilometres by three kilometres. The wind at the White Hill site has very good speed and consistency for wind farming, by both national and international standards.

To develop the wind farm, Meridian widened 14 kilometres of existing tracks and constructed 10 kilometres of new access tracks for the 400-tonne crawler crane that installed the turbines.

Care was taken of the local ecology during construction of White Hill: significant areas were fenced off and topsoil and red tussock were saved for replanting later.

The turbines are 107 metres tall – including the blades. The tubular steel tower and nacelle stand 67 metres high.

The blades have an 80-metre diameter sweep. They are made from glass fibre reinforced epoxy. The blades turn in a clockwise direction at between 9 revolutions per minute (rpm) and 19 rpm.

You can visit an information kiosk and viewing platform just off the Mossburn-Wreys Bush Road near the Mossburn Cemetery. From the kiosk there are great views across to the wind farm.