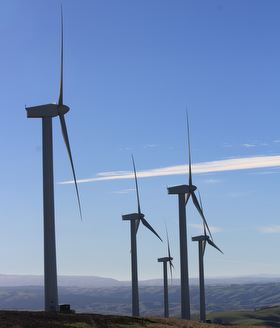 The wind farm has 9 wind turbines, with a combined generating capacity of 7.65MW. The 850kW turbines are supplied by Gamesa, a wind turbine manufacture based in Spain. The turbines have a 45 metre tower, and their blades have a 52 metre diameter. Mt Stuart is the first wind farm in New Zealand and Australia to use Gamesa turbines.

The consent application for the wind farm was originally submitted to the Clutha District Council by NZ Windfarms in late 2008. Submissions closed in February 2009. NZ Windfarms subsequently put the project on hold and then sold its interests in the project to Pioneer Generation in May 2009.

A hearing was held for the application in December 2009, and the decision released in January 2010. Pioneer Generation appealed some of the conditions of consent to the Environment Court. The appeals were resolved out of court.

Pioneer Energy is a community-owned energy company, based in Alexandra, Central Otago.