Power systems are well into a period of disruptive change, moving away from large fossil-fuelled stations towards markets increasingly centered on a range of widely distributed renewable energy sources as the world responds to the need to reduce carbon emissions.

Wind energy is now successfully competing across the globe, building new industries, creating hundreds of thousands of jobs and leading the way towards a clean energy future.

The wind sector currently provides around 5% of the world’s generation capacity up from 3.5% in 2012.

Wind power penetration levels continue to increase, led by Denmark pushing 40%, followed by Uruguay, Portugal and Ireland with well over 20%, Spain and Cyprus around 20%, Germany at 16%; and the big markets of China, the US and Canada get 4, 5.5, and 6% of their power from wind, respectively.

The Global Wind Energy Council’s rolling five-year forecast sees almost 60 GW of new wind installations in 2017, rising to an annual market of about 75 GW by 2021, to bring cumulative installed capacity of over 800 GW by the end of 2021.

Growth is expected to be led by Asia: China will continue to lead all markets, but India set a new record for installations this past year and is on track to meet the government’s very ambitious targets for the sector; and there are a number of exciting new markets in the region with exciting potential.

Market fundamentals are strong in North America, and Europe is progressing to meet its 2020 targets has been given a big boost by the year’s most exciting new development:  the dramatic price reductions for offshore wind. Europe will continue to lead the offshore market.

Offshore wind has had a major price breakthrough in the past year, and looks set to live up to the enormous potential that many have believed in for years. It is expected the technology will continue to improve and spread beyond its home base in Europe in the next 5-10 years.

Despite Brazil’s political and economic challenges, other countries in the region have stepped up to fill the gap, especially Uruguay, Chile and the region’s most exciting new market in Argentina. Africa will have a big year in 2017, led by Kenya, South Africa and Morocco, and the future of wind on the continent looks bright. The Australian market has a strong pipeline of projects to be built out over the next few years. 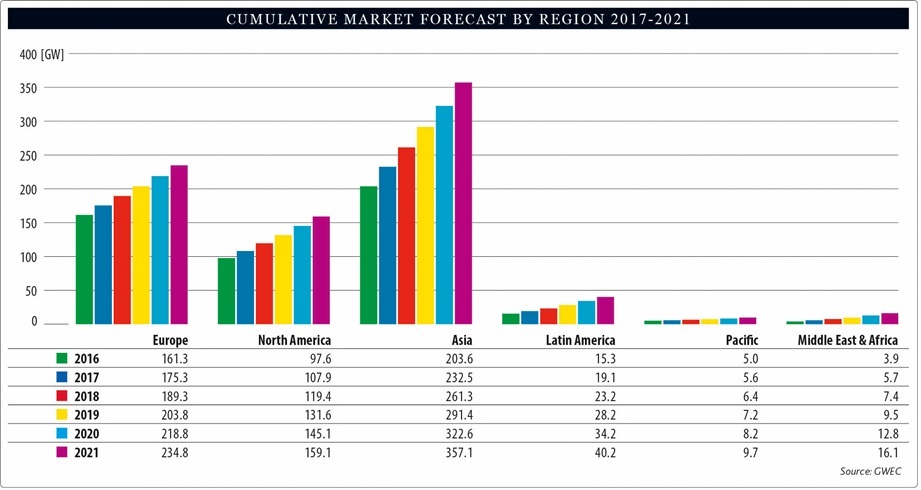 Overall, there is a lot of confidence in the wind power market going forward, as the technology continues to improve, prices continue to go down and the call for clean, renewable power to reduce emissions, clean our air and create new jobs and new industries get stronger.