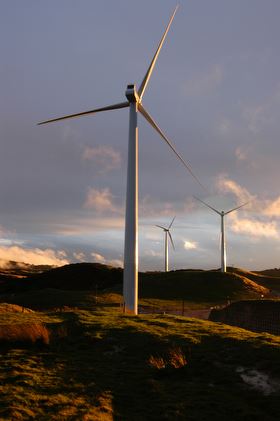 Meridian Energy’s Te Apiti wind farm is located on Saddle Road north of the Manawatu Gorge, 10 kilometres from the city of Palmerston North. It is situated within 1,150 hectares of farmland owned by several landowners, including Meridian Energy.

The wind resource near the Manawatu Gorge is exceptional, even by international standards. The Manawatu gorge acts as a wind funnel, creating consistently high wind speeds.

Te Apiti was the first New Zealand wind farm to supply electricity into the national grid, which is owned by Transpower.

Other wind farms at the time supplied local networks.

The wind farm’s 55 1.65 megawatt Vestas turbines have a total capacity of 90 megawatts. They generate electricity to meet the annual electricity needs of approximately 45,000 average homes.

Each turbine has a tower measuring 70 metres high, and is fitted with 3 blades each 35 metres in length. The blade rotations per minute can vary according to the wind speed but have a maximum speed of 17 revolutions per minute.

Construction of Te Apiti wind farm started in November 2003. Major work was needed to construct 21 kilometres of roads and excavate the turbine foundations. The roads were built to 10 metres wide to carry the width of the 400-tonne crawler crane that was used to install the turbines. After the turbines were erected the roads were regrassed to 5 metres wide.

Te Apiti began generating electricity in August 2004. Construction of all fifty-five 1.65 megawatt turbines was completed in October 2004 and the site was officially opened by the Prime Minister, Helen Clark, on 9 December 2004.

A public viewing area underneath one of Te Apiti’s turbines has views of the wind farm and an information display, but unfortunately the viewing area has been closed to the public, until further notice.