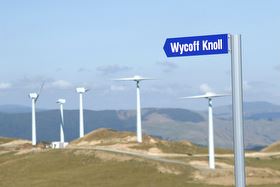 NZ Windfarms has erected 97 wind turbines (48.5 megawatts) at the site. There is consent for an additional 56 turbines (28 megawatts) although no current plans to expand the number of turbines in service.

Stage 1 of construction was completed in 2006. It consisted of five 500 kilowatt Windflow turbines. The New Zealand-made turbines stand 47 metres high, have two blades each 16.1 metres long.

Construction of the remaining turbines is now complete, with 97 turbines now operating.

The electricity generated from these turbines is fed into the national grid through a transmission line that connects Te Rere Hau to the Tararua wind farm substation.

In May 2009 NZ Windfarms lodged a resource consent application with Tararua District Council to install an additional 56 turbines in an area adjoining the consented wind farm. Submissions on the application closed on 27 July, and the council granted consent in January 2010.

This new area has a better wind resource than the lower slopes of the existing farm. NZ Windfarms has erected 32 wind turbines in this area.

NZ Windfarms had planned to erect these turbines within the site that was consented in 2004. An independent energy yield forecast completed for the entire site revealed that relocating the 32 turbines to the extension area would increase the wind farm's energy yield from 122 gigawatts-hours per year (for the wind farm as it is currently consented) to 153 gigawatt-hours per year.

NZ Windfarms was granted tradeable greenhouse gas emissions units (carbon credits) as part of the Ministry for the Environment’s Projects to Reduce Emissions Scheme (PRE) in 2003/2004.

Unfortunately, there is no public viewing area for the Te Rere Hau Wind Farm. There is a viewing area at the nearby Te Apiti wind farm.