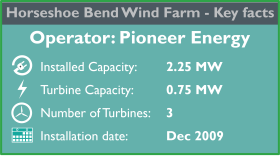 Horseshoe Bend wind farm is 15 kilometres east of Roxburgh, Central Otago, near an existing power station and dam on the Teviot River.

Pioneer Energy began construction on the 2.25 megawatt wind farm in early 2009. The turbines were all fully operational by the end of December 2009.

Pioneer Energy is an independent electricity generator that operates 12 power stations in Central Otago and Southland.