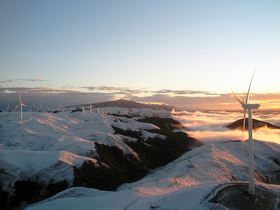 Tararua wind farm is located on 700 hectares of private sheep and beef farming land on the south side of the Manawatu Gorge, in the Tararua Ranges. It is 10 kilometres from the city of Palmerston North, and is operated by TrustPower.

Tararua wind farm is New Zealand’s largest wind farm, both in terms of number of turbines and output. Its 134 turbines have a combined capacity of 161 megawatts and an average annual output of 620,000 megawatt hours.

With average wind speeds of 35 kilometres per hour the wind farm’s performance ranks amongst the best in the world, operating at a 46% capacity factor (capacity factor is the amount of electricity actually generated relative to the amount that would have been produced if the generator had been running at its full output over the same period). The international average capacity factor for wind farms is around 30%.

The wind farm was built in three stages. The 48 V47 turbines installed in Stage I have a combined capacity of 31.7 megawatts. The Stage II expansion was commissioned in 2004, bringing the total installed capacity to 67 megawatts and the number of turbines to 103.

Stage 3 of the wind farm was granted resource consent in May 2004 and commissioned in September 2007. Thirty-one 3-megawatt Vestas V90 turbines were installed, increasing the wind farm’s capacity to 161 megawatts.

Each of the 103 Stage 1 and 2 turbines has three 23.5-metre blades, with the nacelle housing the generator and hub mounted on a steel lattice tower. The blades have full automatic pitch control to ensure the turbine maintains a relatively constant speed of 29 revolutions per minute, and the turbines are able to rotate on their towers (known as yaw) to capture winds from different directions.

TrustPower was granted tradeable greenhouse gas emissions units (carbon credits) for Stage 2 and 3 as part of the Ministry for the Environment’s Projects to Reduce Emissions Scheme (PRE) in 2003/2004.

Wind farms are no longer eligible for carbon credits, although some developers have yet to collect the credits they were granted under the PRE. The last round of the PRE was in 2004. Wind farms will not receive a free allocation of carbon credits under the Emissions Trading Scheme. Wind farms are built today only if they can generate electricity at a cost that is competitive with other forms of generation.