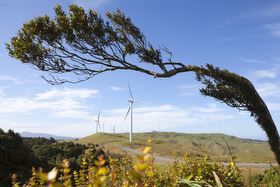 Meridian Energy completed its 64 MW Te Uku wind farm, near Raglan in the Waikato, in March 2011. The wind farm is on 55.8 square kilometres of privately owned sheep and beef farm.

Work began at the wind farm site in November 2009. The first phase of construction focused on building 26 kilometres of roads, which were required for transporting the turbine components to their sites. The roads took approximately six months to construct and were completed in April 2010. Construction of the transmission line to connect the wind farm to Wel Networks' substation began in March 2010.

The wind farm has 28 Siemens 2.3 megawatt wind turbines, giving a combined capacity of 64.4 megawatts. The generate electricity in wind speeds between 14 kilometres per hour and 90 kilometres per hour – that the equivalent of a gentle breeze to a gale. On an annual basis they will generate about 250 gigawatt hours of electricity.

The turbines are the tallest in New Zealand. The stand 130 metres high, with blades that are 49 metres long and towers that are 80 metres high.

The towers were made in South Korea, and the rest of the components, including the nacelle and the blades, were made in Denmark. They were shipped to Auckland by sea, and then transported by road to the wind farm site between September 2010 and January 2011.

Around 40,000 native plants were planted on the wind farm site by Raglan company Whaingaroa Harbour Care. During the consent process, the regional council identified two wetlands on the property as ecologically significant for the region. The 40,000 plants were planted within these two wetland areas – a total of 4.56 hectares – and will help to improve water quality downstream.

Te Uku is New Zealand's northern most wind farm, continuing the diversification of wind energy away from the Manawatu and the Lower North Island.