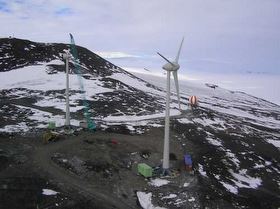 Work on site began in November 2008, with the laying of foundations. The lack of water and the sub-zero temperatures makes it difficult to build the steel reinforced concrete foundations used in warmer climates.

Instead, each turbine has a pre-cast foundation. Each turbine foundation is made up of eight 13-tonne pre-cast concrete foundation blocks arranged in a circle in a pit and then backfilled and frozen in so the tops of the blocks are nearly flush with the ground. An eight-legged steel spider is then bolted to the concrete blocks. The tower is attached to the top of the steel foundation.

The turbines were erected in late 2009, and began supplying electricity to the bases in December 2009.

In April 2012, Antarctica New Zealand and Meridian Energy announced that production of electricity from the Ross Island wind farm was above expectations, bringing benefits to this fragile environment.

Output from the wind farm reduces the running time for diesel generators. The wind farm is expected to reduce the two bases' diesel consumption by approximately 463,000 litres of fuel each year - initially reducing fuel consumption by 11%. The project will result in a reduction of greenhouse gas production from both bases of 1,242 tonnes of carbon dioxide annually. It will also reduce the costs and risks associated with transporting fuel to Antarctica.