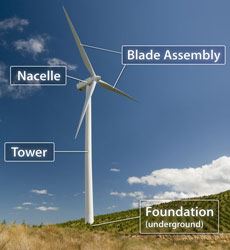 Modern wind turbines are an evolution of traditional windmills. A collection of wind turbines in one location is referred to as a wind farm.

There are four key parts to a modern wind turbine: 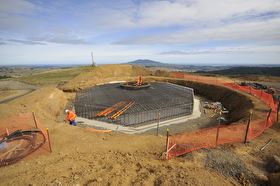 The turbine sits in a steel reinforced concrete foundation – the dimensions of which depend on the size of the turbine. The foundation is a substantial structure designed to ensure the turbine withstands very strong winds. It is always below ground level and not visible once construction is complete. 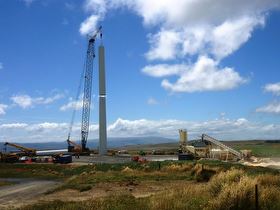 Towers are usually constructed from tubular steel, although some turbines have lattice towers (more like an electricity transmission pylon).

Steel towers are usually painted a light colour, using a kind of non-reflective paint. This helps them blend better into the background. 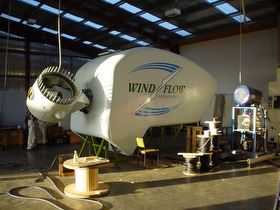 The nacelle is the large housing at the top of the tower. It contains the generator and other important components such as the gearbox and control equipment.

An anemometer and a wind vane, which respectively measure wind speed and direction, sit on top of the nacelle. 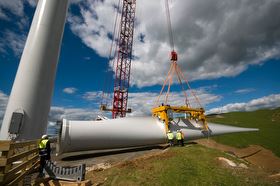 Most wind turbines have three blades or (less commonly) two blades, which rotate around a central hub on a horizontal axis. Blades are made from a variety of materials, such as fibreglass, carbon fibre, or wood laminates.

A turbine with long blades can capture more of the energy in the wind and therefore generate more electricity than a turbine with shorter blades.

Wind turbines generate electricity by using the natural power in the wind. A wind turbine’s blades are like an aeroplane wing: as the air flows past the blade it causes lift, which creates a turning force.

The rotating blades turn a shaft inside the nacelle, which goes into the gearbox. The gearbox increases that rotation speed for the generator, which uses magnetic fields to convert the rotational energy into electrical energy. Some turbines use direct drive technology, which connects the rotating hub directly to the generator. The electricity from the generator goes via cables to a transformer, and then to the wind farm’s substation, where it is converted to the right voltage for the grid or local network. The grid or local network transmits the electricity into homes and businesses.

Wind turbines use an anemometer and a wind vane on top of the nacelle to judge the turbine’s best position. When the wind changes direction, motors turn the nacelle, and the blades along with it, to face into the wind (this movement is called yaw). The blades also ‘pitch’ or angle to ensure that the optimum amount of power is extracted from the wind.