A wind farm on a hillside or ridge line is a visible feature in the landscape. How people feel about being able to see a wind farm is a matter of opinion, and often one of the most emotional and debated topics regarding wind farms.

Wind turbines, and associated roads and buildings, undoubtedly change the character of a landscape. The significance a person attaches to this change will depend on their perception of the surrounding landscape and of the importance of using non-polluting methods to generate electricity.

While some people are averse to the changes in character a wind farm brings, others consider a landscape's character to be enriched by wind turbines utilising the natural element of wind. Ultimately, beauty is in the eye of the beholder.

Wind farm developers use computer-modelling tools to create photo simulations of how a wind farm will look from numerous viewpoints in the surrounding area.

These simulations give a good representation how a wind farm will look when constructed. It is best to view them in the context of the landscape, for example by standing at the location the photo was taken and comparing the view with the simulations.

Wind turbines are highly visible structures. They are large and usually located on open, elevated or prominent sites.

Wind farms are built on hills and ridgelines because that is where the wind is strongest. When the wind's speed doubles, the energy it contains increases by eight. More energy in the wind results in a greater output of electricity from a wind turbine.

The wind speeds at a site are a critical factor in determining the amount of electricity that a wind farm can generate, and therefore the commercial viability of a wind farm.

Developers take steps to minimise the visual impact of a wind farm by:

In addition, the visibility of a wind farm is influenced by factors such as:

The visual impact of a wind farm is assessed on a case by case basis through the resource management consent process.

These photos of Te Apiti Wind Farm give you an indication of how the visual impact of a wind farm varies depending on the distance from which it is viewed. 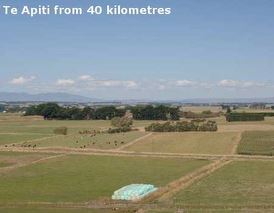 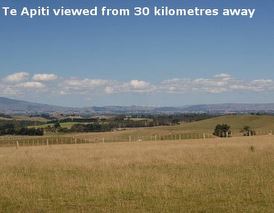 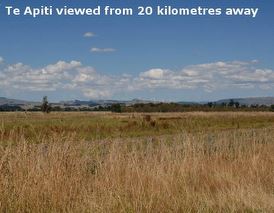 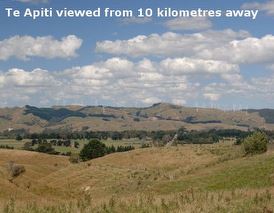 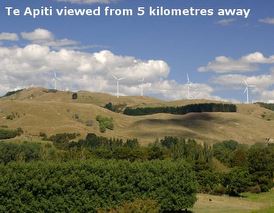