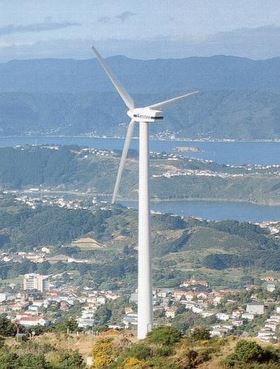 The original Brooklyn wind turbine, on the hills above Wellington, was the oldest operating wind turbine in New Zealand. It began generating in 1993 and operated reliably for 17 years before any major repairs were required. In 2010 the wind turbine was out of commission for several months while Meridian Energy, the wind turbine's operator, waited for the delivery of parts to repair it.

Before deciding to repair the turbine Meridian asked Wellingtonians if the turbine should be repaired, replaced or removed. An overwhelming 85% of respondents said they wanted a turbine operating at the site - with about equal numbers supporting repairing and replacing it. One respondent wrote there are "wind sculptures in Wellington which seem to need regular dollops of money to keep them going, but I guess this is the only one that pays its way".

The Brooklyn site was chosen for the wind evaluation project because of Wellington's strong winds. Since it was installed, the turbine has set international generation records for turbines of its size.

Meridian Energy inherited the single turbine when the company was formed in 1999. Power generated by the turbine is fed into the local network for general distribution in Wellington.

The Vestas V27 turbine has a blade length of 13.5 meters. The turbine tower is 31 metres tall, has a capacity of 225 kilowatts (or 0.225 megawats) and weighs 22.8 tonnes. Over the course of a year it generates the same amount of electricity as 80 homes use in the same period.

In April 2016 Meridian upgraded the Brooklyn turbine with a larger turbine that generates enough renewable energy to power around 490 average homes a year.

The decision to investigate a replacement to the aging Brooklyn turbine was made by Meridian after it experienced mechanical issues which put it out of action for several months.

Meridian asked Wellingtonians whether they wanted to keep the Brooklyn turbine. The public started a “save the Brooklyn wind turbine” Facebook page and a Dominion Post reader survey showed 85% wanted to repair or replace it.

The original 22 year old turbine was removed and delivered to its new owners Energy3, a supplier and installer of turbines for smaller commercial wind farms. It produced about 870 megawatt hours a year, enough to power 110 average homes.